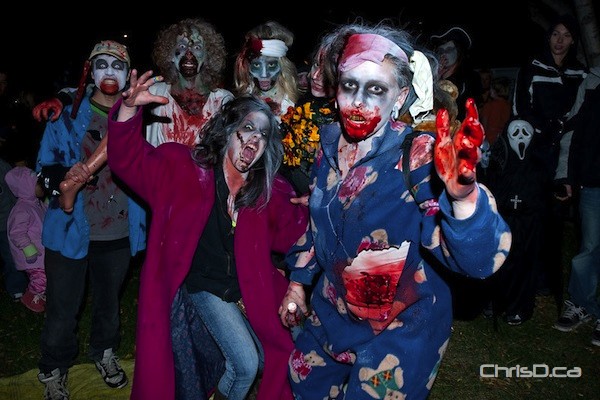 Hundreds of people make their way through city streets as part of the Winnipeg Zombie Walk on Friday, October 14, 2011. (TED GRANT / CHRISD.CA)

Hundreds of people were parading from Stephen Juba Park to The Forks and then eventually to Osborne Village. Winnipeg police issued a traffic advisory by mid-evening warning of congestion along the route. Officers said the large group was generally well-behaved, but did present a hazard to vehicles.

The Halloween tradition keeps growing every year, with about 3,000 zombies in wild costumes and makeup taking part in last year’s event.

The gathering ended at the Zoo/Ozzy’s for Defcon Z as the official after party.

Organizers were asking participants to bring along a non-perishable food item or cash donation in support of Winnipeg Harvest.