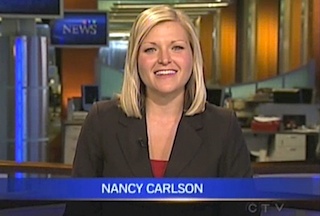 Nancy Carlson in her inaugural newscast on October 2, 2010. (CTV WINNIPEG)

CTV Winnipeg weekend anchor Nancy Carlson is departing the city to head to Alberta — as many local TV reporters/anchors have done in the past few months.

The University of Alberta and Regina journalism graduate started at CTV just over a year ago, but will be returning to the Global franchise in her hometown, while at the same time being closer to family. Prior to Winnipeg, Nancy worked at Global Regina.

“This is a great province with genuine people. I am going to miss it,” Nancy said in a Twitter message while reflecting on her time in Winnipeg.

Her last day at CTV is this Wednesday.

A replacement for the weekend news desk hasn’t yet been named.