Home » Sports » Penguins Give Jets First Win of the Season

Penguins Give Jets First Win of the Season 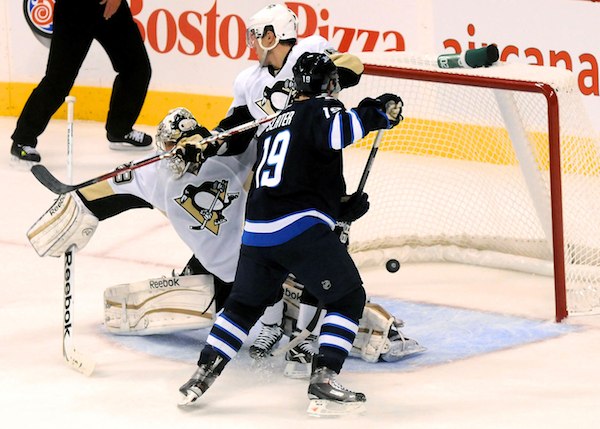 WINNIPEG — The Winnipeg Jets finally got the monkey off their back Monday night, edging the Pittsburgh Penguins 2-1 in front of the always sold-out and raucous MTS Centre crowd.

“It’s exactly what we need,” said Jets net-minder Ondrej Pavelec of his team’s first victory on the young season. “The last three games we didn’t play well, and we finally got the win.”

Pavelec was outstanding, earning the game’s first-star selection by stopping 28-of-29 Penguins shots, including three huge saves late in the second period. Zbynek Michalek finally solved Pavelec’s puzzle on a point shot with 1:38 remaining in the second.

“When he’s on his game, he’s one of the top goalies in the league,” said Jets captain Andrew Ladd. “He seems to get in zones, and hopefully we can ride this for a long time.”

“The feeling in here right now is so much better after those three loses,” added Ladd on the feeling around the dressing room now that the team is no longer winless. “We’ve got to use (the win) in the right way, come back tomorrow and practice and be excited to get even better.”

Beyond the franchise’s first regular season win since moving from Georgia, Winnipeg Jets forward Kyle Wellwood also tied the team’s all-time mark for the fastest goal to open a game.

Eight seconds after the opening faceoff, Nik Antropov found Alexander Burmistrov on the left side of the net. Burmistrov one-timed his pass across the crease where Wellwood beat Marc-Andre Fleury on the backhand.

The marker is the fastest opening goal at home ever, and ties Ron Petrovicky who potted one eight seconds into a game at Pittsburgh, ironically, on December 20, 2003.

Winnipeg scored its second goal with 1:33 remaining in the opening frame, when Burmistrov broke in and found Tanner Glass who banged home a slapper from the high slot.

Winnipeg now heads to Ontario to take on the Leafs on Wednesday, and the Senators on Thursday, before returning home for a Southeast Division tilt with the Hurricanes on Saturday.