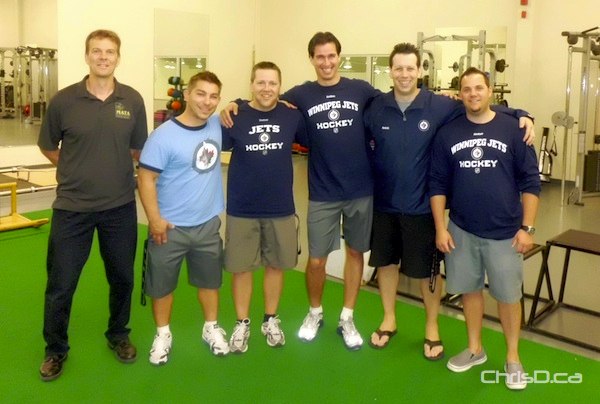 Four athletic therapists from Manitoba have landed their dream job by working with the Winnipeg Jets.

Having the best seats in the house, the team’s training staff tends to any injuries players may experience on the ice, and helps keep the athletes in top physical condition all season long.

“Growing up in Manitoba, there was no better feeling standing on the Winnipeg Jets bench in front of 15,000+ emotionally charged fans,” said head athletic therapist Rob Milette. “It was electric in there I will remember that vividly for the rest of my life.”

October 9 was a special day for everyone on the team, as the reborn hockey club made their first real debut of the regular season.

Fellow athletic therapist Brad Shaw moved back to the province after working with the Kootenay Ice in the Canadian Hockey League.

“The atmosphere was something you can’t begin to explain and to be a part of it was pretty surreal,” Shaw said, reflecting on the home opener.

It wasn’t a huge adjustment for the guys, who were all formally part of the Manitoba Moose organization, but a move into the NHL was nothing to scoff at. The staff — all members of the Manitoba Athletic Therapists Association — have since settled into their offices at the MTS Iceplex.