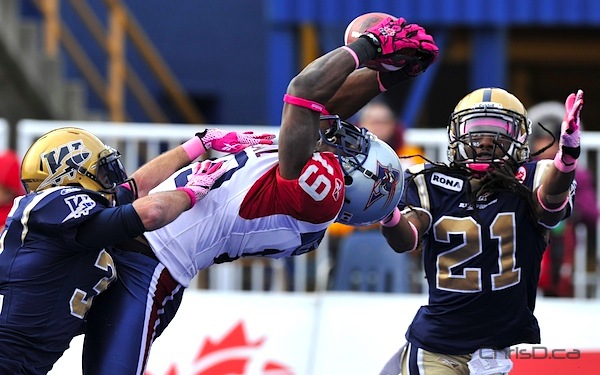 Montreal Alouettes slotback S.J. Green (19) is unable to hold onto the ball in the end zone as he is covered by Winnipeg Blue Bombers safety Ian Logan (L) and defensive back Alex Suber (R) at Canad Inns Stadium on Saturday, October 22, 2011. (FRED GREENSLADE / REUTERS)

WINNIPEG — Canad Inns stadium was a sea of blue, gold, and pink as the Bombers took on double duty fighting the Alouettes and breast cancer.

Kick off was underway at 2 p.m. and the action started early. Montreal’s Anthony Calvillo threw two interceptions in the first quarter, and the Bombers made them pay. Greg Carr put the Bombers on the board with a touchdown at the 10:17 mark. Al’s answered back with two field goals ending the first quarter 8-6 Bombers.

Jamie Boreham booted a single for the Bombers to open up the second quarter. It became a kicking game as the Alouettes’ Sean Whyte kicked another field goal tying the game at 9 a piece. Boreham put up one more single to end the first half and the Bombers up by one.

Al’s put up another field goal taking the lead for the first time in the game 12-10. The momentum continued with a touchdown, and a 29-yard field goal giving the Alouettes a 25-10 lead.

The rest of the fourth became the Chris Garrett show. He got the Bombers fired up with 32-yard run that lead to a Justin Palardy field goal. Garrett kept the fire going with a two-yard touchdown bringing the Bombers within five. With the crowd on their feet, Garrett scored another touchdown with forty-eight seconds left and the Bombers put away the big 26-25 “W.” The rain held off until the final buzzer. The 30,360 fans ran from the stadium making their way downtown to the MTS Centre; hopeful to see another Winnipeg win tonight as the Jets take on the Carolina Hurricanes.

The Alouettes and Bombers are tied for first place in the CFL East Division with 10-6 records. The Bombers won the three-game season series and will earn first place if the clubs finish the regular season tied.