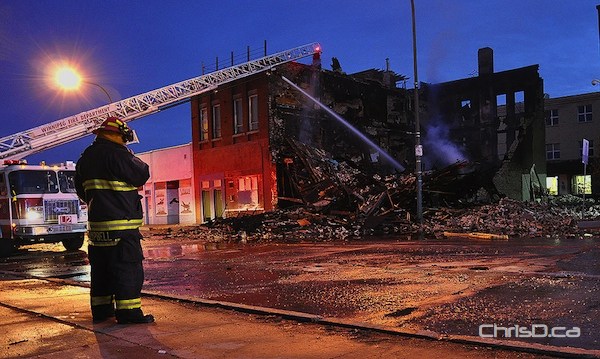 Firefighters put out hotspots following a fire in the 200 block of Logan Avenue on Tuesday, October 25, 2011. (MAURICE BRUNEAU / CHRISD.CA)

A building in the 200 block of Logan Avenue broke out in flames early Tuesday morning, sending at least one woman to hospital with non-life threatening injuries.

The warehouse-turned-residence became engulfed shortly after 3 a.m. between Main and King Street.

The fire was extinguished at around 6 a.m., but smoke could still be seen billowing from the scene.

Offices that house the Winnipeg Regional Health Authority are nearby to the damaged building — which has since collapsed. Staff are being told to avoid coming into work today.

As of 8:20 a.m., roads in the area were still blocked to traffic as firefighters remained on scene.