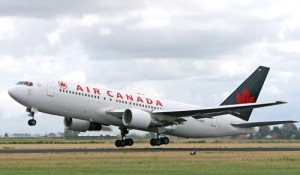 A Grand Prairie, Alberta man was arrested Tuesday night after becoming unruly aboard an Air Canada flight, forcing the airline to land in Winnipeg.

The man was on a flight destined for Toronto from Edmonton at about 7:15 p.m. when he caused a disturbance aboard the plane, which was carrying 148 passengers at the time.

Winnipeg police were called to the James Richardson International Airport after the man appeared intoxicated and refused direction from AC crew members. The man allegedly tried lighting a cigarette on board, and was later restrained by the cabin crew.

Byron Pinksen, 41, has been charged with a number of offences and remains in custody.