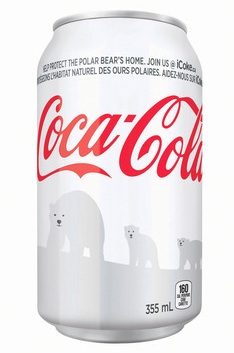 Keep your eyes peeled for white Coca-Cola cans on store shelves this holiday season — you’ll be seeing a lot of them.

In honour of the polar bear, Coca-Cola is changing the colour of its iconic red can to white in an effort to raise awareness and funds to support the World Wildlife Fund (WWF). The initiative will help fund WWF’s “Arctic Home” campaign.

The beverage-maker will also contribute $2 million to WWF over the next five years, while at the same time matching consumer donations up to $1 million USD until March 15, 2012.

The two companies have also partnered with Warner Bros. Pictures and IMAX to co-produce a new film titled “To The Arctic 3D,” which will also showcase polar bears in their habit. “Arctic Home” television commercials will also start airing soon to coincide with the launch of ArcticHome.com on November 1, which provides a sneak preview of the film.