After six years in the making, Winnipeg’s new air terminal building at the James Richardson International Airport is finally open for business today. 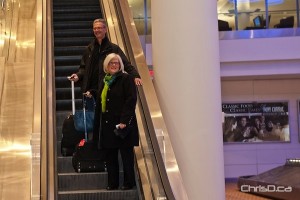 Rodger and Linda Chaput were the first passengers to arrive at the new airport on Sunday, October 30, 2011. (TED GRANT / CHRISD.CA)

The first passengers started departing at 5:10 a.m. on an Air Canada flight bound for Toronto, while the first arriving flight landed at 8:18 a.m.

The state-of-the-art facility has been working out any kinks for the past several months, and recently held passenger trials to make sure everything would run smoothly.

The 51,000-square-metre, $585-million building is also one of the greenest airports in North America, featuring many windows and high efficiency lighting to create an open atmosphere. 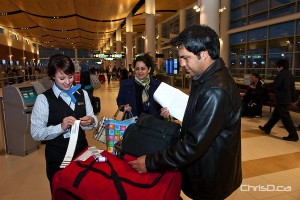 A WestJet agent tags the luggage of Maryam and Manouchehr on their way to Ottawa on Sunday. (TED GRANT / CHRISD.CA)

The first group of arriving passengers were welcomed with refreshments and memorabilia to commemorate their involvement in the historic day.

Next door, the old terminal building saw its last passengers late Saturday night before the lights were turned off and the transition to the new terminal was made.

The new airport should only make for an increase in passenger traffic. The WAA reported earlier this week that traffic was up 2.7% from last year in its third quarter.

← Previous: 'In The Next Room' to Debut at MTC November 3 Next: Ontario Woman Killed in Rollover West of Falcon Lake →
Tags: James Richardson International Airport