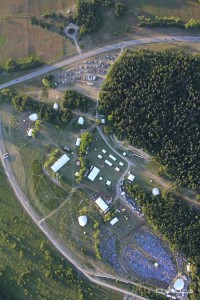 The first phase of a $2.7 million redevelopment plan at the Winnipeg Folk Festival site is complete.

“After 1.5 million visitors, we’ve realized our festival home is in need of some critical and urgent upgrades,” said board chair Gerry Couture.

The La Cuisine kitchen, which had its grand opening on July 4, is also now complete.

“We found three buildings slated for demolition and repurposed the components to create the structure,” said project manager Gerry Humphreys, referring to the eco-friendly kitchen, which prepares 45,000 meals during the festival.

Work will now begin on the second phase, including two new forest stages, a new festival village, pathways, lighting, electrical upgrades and a bus loop by the main gate.

Folk Festival organizers also made it clear that their site upgrades are separate from the Birds Hill upgrades announced in June.