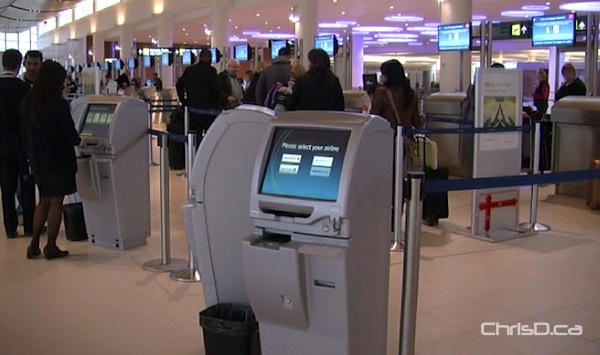 One of the many common-use check-in kiosks on the departures level of the James Richardson International Airport. (CHRISD.CA)

The James Richardson International Airport opened its gates for the first time Sunday morning, as the first passengers arriving from Ottawa were thrust into the historic occasion at 8:18 a.m.

Passengers were very impressed with the new airport, as most were not expecting to step foot into a new terminal.

Winnipeggers John and Deborah Bouchard on the same flight were equally impressed.

“It’s a very impressive [airport] … it’s comparative to Ottawa’s airport.” Asked how it compares to the former terminal, the Bouchards said it doesn’t. “It’s a lot better.”

One of the busiest people involved with the opening was Christine Alongi, Director of Communications and Public Affairs for the Winnipeg Airports Authority.

“The team is really excited to have this vision become a reality, and to hear the comments of the travelling public is fabulous,” Alongi said. “Overall [it] was a very successful day.”

Guests appeared to be familiarizing themselves quite well with the new digs, including the common-use kiosks on the departures level. In fact, the check-in process overall seemed to be a breeze.

View the photo gallery below from opening day.

One of the many common-use check-in kiosks on the departures level of the James Richardson International Airport. (CHRISD.CA)

— With files from staff