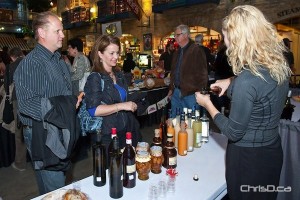 A wine vendor pours a sample glass for people at the International Wine Festival of Manitoba at The Forks in this file photo. (TED GRANT / CHRISD.CA)

Effective today, patrons can bring a bottle of their own wine to enjoy at participating Manitoba establishments that have a licensed dining room.

As previously announced by the province, the new hospitality strategy allows for bring-your-own-wine service, where diners will have their bottle opened and served by restaurant staff. This service is voluntary and up to individual establishments. The MLCC recommends patrons call ahead to ensure their chosen restaurant allows for outside wine.

“There are often times when patrons want to bring in a special wine or specific vintage to celebrate a significant event, or simply enjoy with their meal,” said acting MLCC president and CEO Roman Zubach in a release.

Licensed establishments that take part in the program will be allowed to set their own corkage fee.

Manitoba becomes the sixth province to offer such a program.

Also effective November 1, the MLCC can now issue three-year liquor licences, instead of year-to-year licences. The multi-year licences will satisfy business owners who usually had to submit their renewals each year.

The MLCC is also preparing to close its request for proposals in regards to a new pilot program to have grocery stores open mini boutique-style liquor stores. A request for proposal to allow up to five Liquor Mart Express locations in five urban grocery stores in currently out. James Richardson International Airport will have its own express location opening later this month.