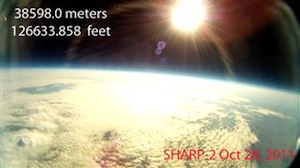 A still shot taken from aboard the SHARP-2 balloon. (HANDOUT)

Students from Shaftesbury High School who launched a high-altitude balloon have surpassed their initial goal of how high the device would actually fly.

The students launched the SHARP-2 balloon in Riding Mountain National Park on October 28 and had hoped it would reach 120,000 feet. Using GPS tracking software to monitor its height, the balloon reached more than 127,000 feet.

During the flight, the balloon had its highest point above Gladstone, Manitoba.

“We were able to collect our landed payload just south of MacGregor, MB with great help from community members tracking the balloon on line and the amateur ham radio society who were tracking the radio beacons,” the Pembina Trails School Division said.

The students will now be analyzing data from the flight, including video and still pictures from the balloon’s two on-board cameras.