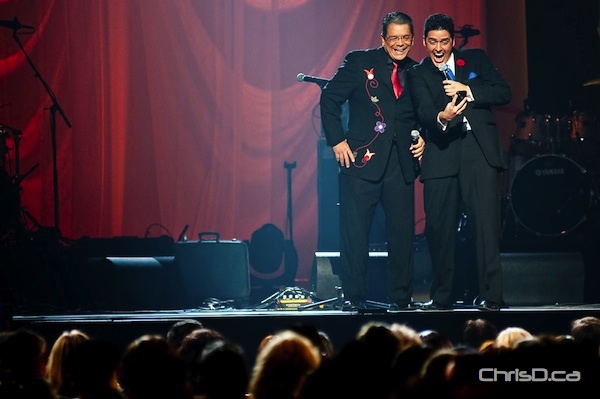 WINNIPEG — It was a star-studded night at MTS Centre Friday as the best in Aboriginal music was honoured during the 6th annual Aboriginal Peoples Choice Music Awards.

The awards show was part of the Manito Ahbee Festival, a four-day event to highlight Aboriginal music, art and culture.

Nominees began the night by walking the red carpet and getting their turn in the spotlight before the live show, which was aired on APTN to a national audience. About 4,000 fans attended the awards in person.

Lorne Cardinal and Kyle Nobess were hosts for the evening. Highlights included Errol Ranville being honoured with the Lifetime Achievement Award, while winners in nine other categories were crowned.

One of the big winners of the evening was up-and-comer singer/songwriter Ali Fontaine. The 17-year-old from Sagkeeng First Nation picked up wins for Best Country CD and Best New Artist, while at the same time riding a wave of success from her chart-topping hit “Runaway.”

“It’s a little hard to believe right now. I was excited just to be nominated and to get to walk the red carpet,” Fontaine said. “And now I have won two of my three nominations — it’s a dream!”

And the winners are…

Single of the Year
Winnipeg’s Most — Winnipeg, Manitoba (Don’t Stop)

Best Music Video
Winnipeg’s Most — Winnipeg, Manitoba (All That I Know)

Festivities will continue today and Sunday at MTS Centre with the International Competition Pow Wow, and Indigenous Marketplace and Trade Show.