Home » Sports » Manitoban King of the Clydesdales at Toronto Fair

Manitoban King of the Clydesdales at Toronto Fair 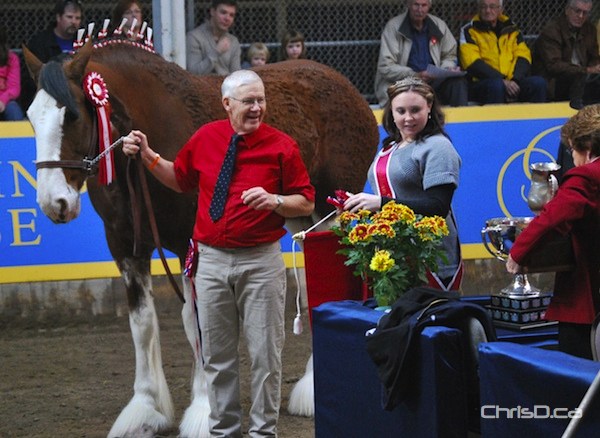 Reg Madsen and his horse Allie celebrate their win at the Royal Agricultural Winter Fair in Toronto on Sunday, November 6, 2011. (TRINA MAUS / CHRISD.CA)

TORONTO — Reg Madsen first fell in love with the Clydesdale horse breed, made famous by Budweiser, when he was 14-years-old after his uncle gave him a horse. Now more than 50 years later, the wheat farmer from Hamiota, Manitoba can brag he has the best horse in Canada.

Madsen and his wife Carol decided to bring their prized mare, WV Greendykes Charismatic Finale, or affectionately known as Allie, compete at the Royal Agricultural Winter Fair in Toronto this past weekend.

“Allie is the best horse I have ever owned,” Madsen said while getting his 2,000-pound mare ready for the show. “She is so easy to handle in the ring.”

The mare was a favourite to win heading into the Royal after capturing Senior Grand Champion Mare at the World Clydesdale show held last month in Wisconsin. “It was a thrill to do well at the World show, but for me winning at the Royal means more because of the history and nostalgia associated with the event.”

On Sunday, Madsen and Allie competed against 12 other horses in the yeld mare class. The duo easily won.

“She was so comfortable in the ring, but I had butterflies,” Madsen admitted. The pair went on to not only win Grand Champion Mare, but Supreme Champion Clydesdale. They beat every Clydesdale competing in hand at the Royal this year. “It is such a thrill, not bad for a little old farmer from Manitoba,” Madsen said with a handful of hardware.

What’s the next step for the 68-year-old now that he’s won everything? “I hope to make another World Show before I retire, they are held every four years, and the next one is in Ontario.” Madsen is also looking for a stallion to breed to Allie. “I hope it is her baby I can show at the next worlds.”

Madsen currently has 12 Clydesdales at his 160-acre farm in Hamiota.