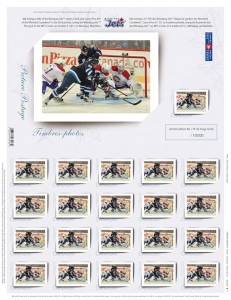 Winnipeg Jets fans will have yet another piece of memorabilia they can collect after Canada Post unveiled a set of commemorative postage stamps on Thursday.

The first stamp design features the new team logo of a fighter jet poised over a red maple leaf against a solid blue background. The next features the secondary logo, an image of crossed hockey sticks resting on military-style wings which also incorporates a red maple leaf. The third stamp highlights the first goal scored on home ice at MTS Centre by Jets player Nik Antropov on October 9, 2011.

The stamps are sold in sheets of 21 and sell for $24.95 each. The limited edition/numbered 1st goal sheets are $34.95. A souvenir postcard and photograph of the Winnipeg Jets in the opening game of the 2011-12 NHL season is also available for $4.95.

All products are on sale today at Canada Post retail outlets in Winnipeg and at CanadaPost.ca. The stamps will also be sold at Jets home games.