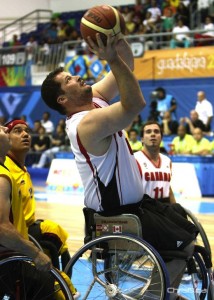 The Canadian Men’s Wheelchair Basketball Team came out victorious on the first day of competition at the 2011 Parapan American Games in Guadalajara, Mexico on Monday.

Defeating Colombia 57-38, Lorette, Manitoba native Joey Johnson is instrumental in the team’s success during the competition, and is considered to be one of the best players on Team Canada. Johnson recently won gold at the BT Paralympic World Cup in Manchester, and has several more medals to his name.

In game action, Patrick Anderson of Fergus, Ontario paved the way for the Canadian men with a game-high 23 points and seven rebounds in his 34:43 of floor time. David Eng of Montreal added eight points and six rebounds for Canada.

“They are a very tall team, a quick team, and they have improved over the last two years since we last saw them,” said assistant coach Paul Bowes.

Manitoba is also being represented on the women’s team. Head coach Bill Johnson is from Winnipeg, and helped lead the women to a 67-49 win over Brazil on Monday.

The games run until November 20.