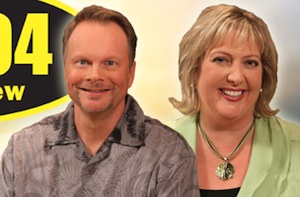 Caroline Hunter resigning as one half of the QX104 morning show on Monday was only the beginning to what will become a revamped AM team at the country music station.

“We released him from his contract,” general manager Sharon Taylor confirmed in an e-mail.

Taylor said the station did some research once talks began with Caroline about leaving, to see what direction the show would take.

“There was not the traction on mornings with the audience that is necessary to continue on,” Taylor added. “We wish him [Mike] the very best.

As reported earlier, Brody Jackson began filling in this morning until management puts together a new morning team.

QX104 is the sister station of Hot 103. Both are owned by Astral Radio.