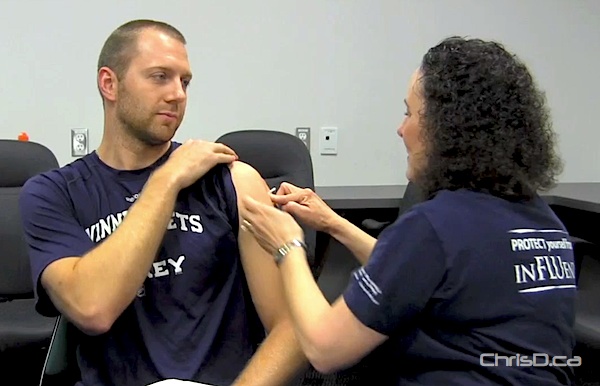 Late afternoon Tuesday, just before the Winnipeg Jets held their first ever open practice and skills competition at MTS Centre, players and coaches received their flu shots from the Winnipeg Regional Health Authority.

“I feel it is important to receive a flu shot because remaining in top health throughout a long, grinding hockey schedule is difficult,” Jets captain Andrew Ladd said in a release.

“When you have large groups of people together, there is an increased risk for transmission of germs and viruses like influenza,” Arlene Wilgosh, Winnipeg Regional Health Authority president and CEO said. “We’d like Jets fans and every member of the public to get vaccinated so they don’t get the flu and miss a game or any other important event.”

While currently sitting in fifth in the Southeast Division with a record of 6-9-3, the Jets can ill afford to come down with a team-wide sickness anytime soon. They face the division-leading Washington Capitals and conference-leading Philadelphia Flyers this week before heading out on a three-game road trip through Washington, Carolina, and Boston.