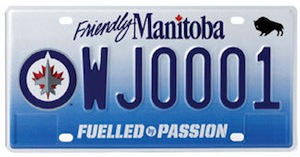 Following the success of the Winnipeg Blue Bombers to launch custom licence plates, the Winnipeg Jets now have their own.

The team announced Tuesday that the limited edition plates will be available to fans from Autopac brokers across the province starting December 12.

The plates will cost $70 each, with $30 going to the Winnipeg Jets True North Foundation. The remaining proceeds will be shared between Manitoba Public Insurance and the province.

An initial supply of 20,000 plates will be available, and more could be produced based on future demand.

“This provides a great opportunity for hockey fans across Manitoba to show their passion for the Jets while assisting our foundation’s continuing mandate to support numerous initiatives across our community,” Winnipeg Jets chairman Mark Chipman said.

The Jets also announced that a second Jets Gear merchandise store is now open at St. Vital Centre . The store will be located in the London Drugs/Sears wing and feature exclusive merchandise not found at any of the authorized retailers, such as team-issued equipment used by Winnipeg Jets players, including sticks, gloves and hockey pants. The store was opened following the success of the original Jets Gear at MTS Centre.