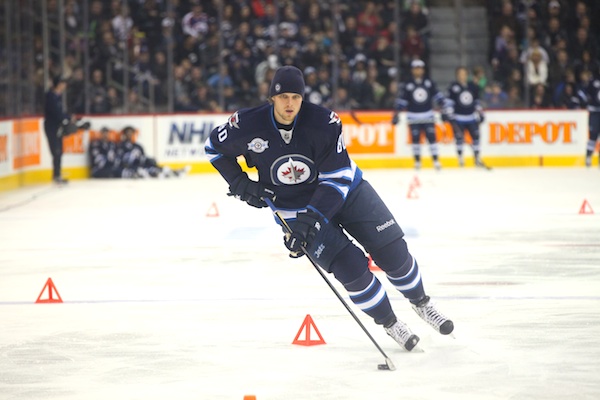 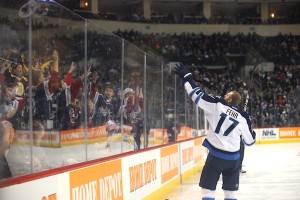 Thursday night the Winnipeg Jets held their inaugural Skills Competition at MTS Centre, with Team White coming away with a near-dominant 25-11 victory over Team Blue.

The light-hearted competition saw an estimated 10,500 fans take in the five-event series, including many young families and uniformed sports teams that would normally not be able to see Winnipeg’s newest sports franchise in live action due to scarce ticket availability and price.

Beyond the fans, it gives the players themselves a chance to have some fun.

“Guys are joking around and doing some fun stuff,” said captain Andrew Ladd. “It’s great for (the fans) to see us like that, and for us to interact with them too.”

The night’s opening event, the breakaway competition, got the crowd fired up almost immediately as the two teams were tied after the initial 18 attempts. It took an additional 14 tries to find a winner, with Team White coming out ahead 6-5.

While Team Blue’s Alexander Burmistrov scored on both of his chances, including an absolute beauty-backhand move to beat Ondrej Pavelec, it was Team White’s Eric Fehr and Chris Thorburn going 2-for-2 that led to their 11-point event-total win.

The fastest skater was tested next, with Team White’s Evander Kane and Tim Stapleton tying for best time with 14.06-second runs. Kane could have possibly done better had an errant water bottle tossed from the Blue bench not hit him in the leg on the straightaway.

The Accuracy Shooting competition was dominated by White’s Kyle Wellwood, as the off-season free agent signee was the only competitor to nail all four targets on four attempts, resulting in the event’s fastest time of 9.38-seconds.

“That’s the second time I’ve done it, and I got 4-for-4 each time,” said a smiling Wellwood. “Today they were even bigger targets than normal.”

The Puck Control Relay was a two-heat, six-player race that was split between White and Blue. The deciding head-to-head between young speedsters Kane and Burmistrov proved close, but the 6’2” 195lb Canadian-born Kane edged the 6’1 180lb Russian by two strides.

The hardest shot was held until last, and for good reason. The crowd went wild as the ‘heavy’ favourite, 265 lb Dustin Byfuglien crushed a 104 mph blast to take the bragging rights. Fellow tough guy Chris Thorburn was next in line with a clocked speed of 98.

The surprise performer of the night was the diminutive Tim Stapleton, as the 5’9” 180 lb fourth-line forward was tied with the fastest skater on the ice, finished second in accuracy shooting by going 4-for-5 in 10.56-seconds, and had a very surprising 96 mph shot that put him in third among shooters.

“To see 96, I was actually surprising myself,” said Stapleton. “I did every event tonight, and like I said, it was a lot of fun.”

Stapleton’s speed is something that doesn’t surprise many, especially the laid-back player himself.

“I think (my speed) might be the only reason I get a chance in the NHL sometimes. So, I just tried to not fall and it worked out,” he added with a laugh.