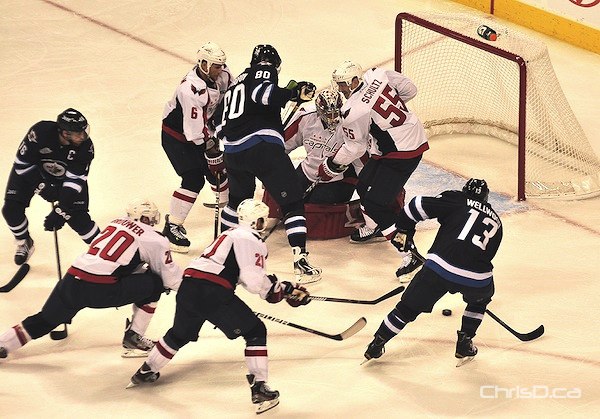 Winnipeg Jets centre Kyle Wellwood (13) prepares to pound the puck in the net to make it 4-1 in the second period of play at MTS Centre against the Washington Capitals on Thursday, November 17, 2011. (MAURICE BRUNEAU / CHRISD.CA) 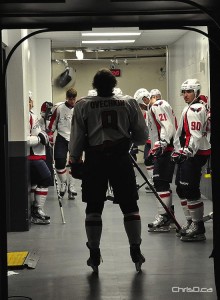 The culture change head coach Claude Noel is trying to instill in his new team may be starting to take hold, as his Winnipeg Jets have gone from a five-game losing skid to knocking off two extremely dangerous division opponents in convincing fashion.

“I don’t think the culture is built in two games, but it helps,” said Noel after Winnipeg’s 4-1 victory over the Washington Capitals Thursday night.

“We’ve had some big opponents in Tampa Bay and Washington. We’ve got Philly coming in. It’s a pretty daunting task, but we have a lot of trust in our group. We got players playing really hard for each other, and it’s fun to watch.”

Despite the Caps taking an early lead via Alexander Semin, Winnipeg didn’t wane as Evander Kane tied it up at 7:51 of the first. Kane struck again early in the second with his eighth of the year to give the home side the lead — and they didn’t look back.

The game’s major momentum swing occurred as a Washington shorthanded 2-on-0 was foiled by Ondrej Pavelec. The Winnipeg power play unit then turned up ice and capitalized on their own odd-man rush.

“That’s the turning point of the game,” said Washington forward Brooks Laich. “I thought I made the shot. I thought I scored. My arms were in the air, and they come down and put the puck in the net. Instead of it being 2-2, it’s 3-1. I’ll accept the blame for that. They still have to come 200 feet to score, but if I can put that in the net, it’s a totally different game.”

It was Blake Wheeler’s first of the year, and contributed to one of the Jets’ best overall special teams performances of 2011.

Winnipeg went 2-for-5 on the power play while killing all five of Washington’s advantages, including just over a minute of 5-on-3 in which Pavelec stood on his head.

The 24-year-old Winnipeg netminder stopped 31 shots in his 11th consecutive start, and was named the game’s second star behind Kane’s two-goal performance.

Winnipeg will work to do just that as they face the Eastern Conference leading 11-4-3 Philadelphia Flyers on Saturday before heading out on a three-game road trip. The 7-9-3 Jets currently sit just four points back of both Washington and Florida for the Southeast Division lead.