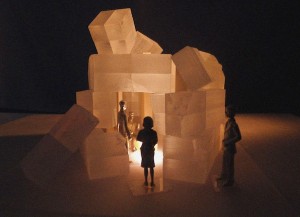 'Five Hole' is one of the winning designs -- created by a Los Angeles firm to represent an abstract igloo. (HANDOUT)

Five new warming huts were unveiled Friday at The Forks — later to be placed on the river trail once temperatures plunge into the minus double digits.

Three of the five huts come from an international competition, one from a separate student competition at the University of Manitoba and the third from world renowned invited architect, Frank Gehry. Gehry is known for his work as the designer of Spain’s Guggenheim Museum, the Dancing House in Prague, the Experience Music Project in Seattle, the Cinematheque francaise in Paris, and other works.

The huts will be constructed in early January (weather permitting) and act as shelter for citizens who enjoy the several-kilometre-long river trail each winter.

← Previous: PODCAST: Eastern Final Showdown for the Blue Bombers Next: Community Group on the Hunt for Violent Children's Toys →
Tags: The Forks