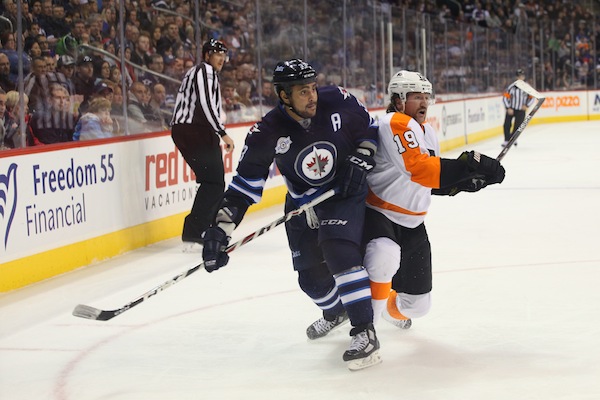 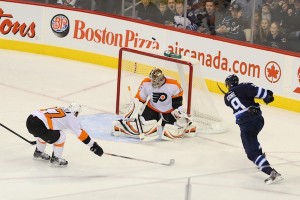 WINNIPEG — The Winnipeg Jets are soaring after knocking off another Stanley Cup contender — this time the Eastern Conference frontrunners from Philadelphia by a score of 6-4 in front of their advantageous home crowd on Saturday afternoon.

“They’re not the best team in the league for nothing,” said bench boss Claude Noel of his opponents. “They’ve got some weapons. I thought we played pretty well. It was a really up and down game.”

“Every game we challenged ourselves,” said defenceman Dustin Byfuglien, who was named Saturday’s first-star on the heels of a three-point performance. “We had great teams to play against, and I thought we did a great job this week.”

The Jets — now 8-9-3 through the season’s first 20 contests and 5-3-0 at home — did fall back to their old undisciplined ways by committing nine total penalties, but took advantage of their own opportunities by going 3-for-8 on the power play by way of Bryan Little, Andrew Ladd, and Byfuglien goals.

“It’s something that we needed,” added Byfuglien, who was in on all three power-play markers. “We got a lot of power plays right off the hop, and it’s something we took advantage of.”

Former top-line centre Bryan Little, who scored twice in the game’s opening seven minutes on Saturday, has turned things around for himself after a shaky start to the season.

“I feel like I’ve been playing a lot better lately and this is definitely going to help,” said the former 31-goal scorer. “Our line had some real chemistry, especially in the first.”

Little found himself on a new forward trio with Blake Wheeler and Evander Kane, and notched his third and fourth goals of the season.

The Jets now enjoy a well-deserved day off before heading out on a three-game road trip that takes them through Washington, Carolina, and Boston.

Sidenote: Former Washington first-round draft pick and Winkler, Manitoba product Eric Fehr played in his first game for the Jets on Saturday, logging 7:19 of ice-time in his first action since undergoing shoulder surgery.