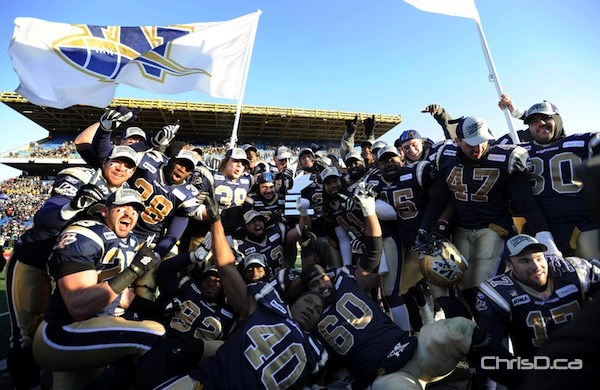 WINNIPEG — History will read; on the last play ever at Canad Inns Stadium — and the former Winnipeg Stadium — the Winnipeg Blue Bombers scored a touchdown.

Running back Chris Garrett plunged in from three yards out as time expired in the CFL’s Eastern Final on Sunday, giving the Blue and Gold a Grey Cup birth with a 19-3 victory over the Hamilton Tiger-Cats.

“We had to establish the run because it was kind of cold and windy,” said Garrett who racked up an impressive 190 yards rushing on 29 carries. “My hat goes off to my offensive line for opening holes for me.”

“He’s so willing and so hungry as a young player,” said Pierce of the standout rookie running back Garrett. “I think he made his mark today.”

Pierce, who has faced serious injury, adversity, and external doubt since his fall from grace in B.C. is ready to re-establish himself as an elite, winning quarterback.

“I’ve always known that I could do it, and it was just about getting it done,” said the 30-year old signal caller moments after the win. “And doing it the only way I know how — with physical football.”

“These players have worked very hard and faced a lot of adversity,” said head coach Paul LaPolice. “I’m very proud for them.”

“To go from last place — the worst team in 2010, to win the Eastern Division… you can’t write stories like that,” said defensive lineman Doug Brown, who has been to a pair of Grey Cups with Winnipeg (2001 and 2007) but remains ringless. He has stated his intent to retire after the season.

“Very few teams and players get the storybook ending that we quest for,” added the 11-year veteran. “We’re on our way, and in position to take a run at it. In this game and this league, all you can hope for is one more chance.”

Hamilton struck early as Justin Medlock kicked an 18-yard field goal eight minutes in, and it stayed 3-0 until a 6-play, 67-yard drive put the Bombers on the Ti-Cat doorstep midway through the second quarter.

From there, quarterback Alex Brink came in — as usual — to punch it in. But that’s where the Ti-Cats found themselves fooled. Brink rolled out and found defensive-end Jason Vega for the touchdown. It was Vega’s second catch on offence in 2011, and by far his biggest.

The Blue Bombers will fly to Vancouver on Tuesday to meet the B.C. Lions in the 99th Grey Cup on Sunday, November 27.

Winnipeg has not won a Canadian Football League title since their 50-11 thrashing of the Edmonton Eskimos in 1990; a game played in the same BC Place they will play in this year. It is the longest current championship drought in the CFL.