CONTEST: Win a Trip to the 2011 Grey Cup in Vancouver 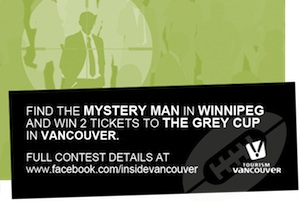 Tourism Vancouver and ChrisD.ca want to give you the chance to win a trip for two to the 2011 Grey Cup in Vancouver on Sunday, November 27, where the Winnipeg Blue Bombers will face the BC Lions.

A Mystery Man will wander the streets of Winnipeg starting Tuesday between 8 a.m. and 7 p.m., until he is caught.

To win, you must be the first person to find him and say the secret phrase. The secret phrase can be found on the Tourism Vancouver Facebook Page under the “Grey Cup Chase” tab. We will also post daily clues on our Twitter account, so be sure to follow @ChrisDca and the official @GreyCupChase account.

The clues will give a hint to the location of the Mystery Man in Winnipeg at certain times during the day.