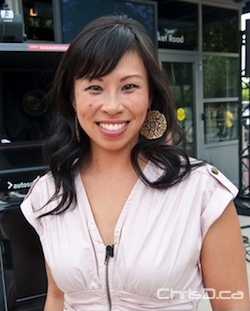 Chen has been part of the local morning TV program since 2009, and most recently, a guest food columnist for Metro Winnipeg since the spring.

The Ryerson University grad came from Ontario, where she spent seven years at OMNI TV. Chen will be returning to Toronto to explore other career opportunities after spending the holidays with family in Halifax.

Reached by e-mail, Chen said it was a tough decision to leave the city.

“I felt there were more things I wanted to do and have always missed being back East. I’ve met the most amazing people in Winnipeg and am overwhelmed with the kind words and support from BT viewers.”

As for the future, the “Treehouse TV” alumnus plans on taking a few months off to travel. Viewers will be able to follow her adventures on her newly-launched website at PayChen.com.

Chen’s last day on the show is Friday. A replacement at the Rogers-owned station hasn’t yet been announced.