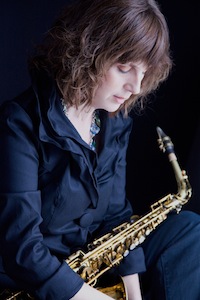 A local jazz musician, who can often be heard lending her time on the saxophone at the Winnipeg Symphony Orchestra, will release her latest CD on Thursday.

Janice Finlay has been named “top sax” three years in a row by her fans, and is now set to release Anywhere But Here, her highly anticipated album containing eight original tracks and a remake of the jazz classic Bye Bye Blackbird. Finlay’s first album, She’s Hip, was released in 2002 and later nominated for a Western Canadian Music Award.

Finlay is also a longtime member of the Ron Paley Big Band.

The album release will be held in the Laudamus Auditorium at Canadian Mennonite University (north campus) at 8 p.m. Doors open at 7:30 p.m.

Advance tickets are $17.50 for adults and $16 for students, or $22 and $21 at the door, respectively. Tickets are available at TicketWeb.ca or McNally Robinson Booksellers at Grant Park.

Anywhere But Here will be available on iTunes November 24.