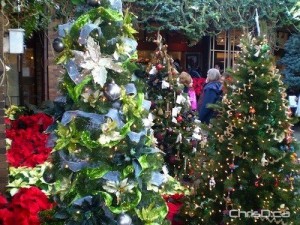 The Festival of Trees and Lights (CHRISD.CA FILE)

While you may or may not have your own Christmas Tree up already, more than a dozen decorated ones will be on display beginning today in the Manitoba Hydro Gallery.

The annual Festival of Trees and Lights opens downtown, symbolizing the start of the festive season. Each tree has been skillfully decorated by volunteers associated with the organization or group that donates their time to beautify and sponsor the trees each year.

Admission is free, but donations are accepted. Proceeds from the 2011 tree raffle will be directed to the Mission Off the Streets Team (MOST), Siloam Mission, and The Friends of the Gardens Manitoba

The Festival of Trees and Lights has raised more than $500,000 for local charities since 1988. This year’s festival runs until December 11.