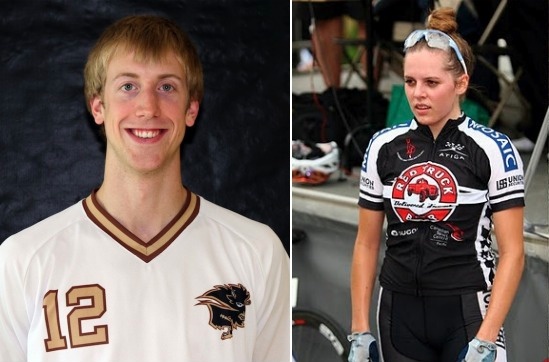 Two Manitoba athletes have been chosen to receive annual scholarships of $3,000 from Sport Manitoba.

The 2011 Princess Royal Pan Am Scholarships were awarded to volleyball player Chris Voth and cyclist Karlee Gendron during a presentation Saturday night at the Investors Group Athletic Centre.

The scholarship will be put to good use by Voth, especially as he progresses through his university career.

“The expenses related to volleyball are rising as I climb the high performance ladder,” he said in a release. “Training becomes longer, more specific and more expensive. I have always placed a great deal of effort into giving back to the community and to my academic endeavors as well.”

Karlee Gendron is a member of the Manitoba provincial cycling team and has quickly established herself as a serious competitor since joining in 2006. Gendron’s career highlights include a second place finish at the 2008 USA World Junior Qualifiers and a bronze medal at the 2009 Canada Summer Games. In 2010 Gendron won her first Professional International Women’s Race and picked up a silver medal at the 2011 Western Canada Summer Games.

Both Gendron and Voth are working towards a Bachelor of Kinesiology degree at the University of Manitoba.

Selection of a male and female athlete to receive the scholarship is based on their sport and academic standing.

← Previous: Tory Leader McFadyen to Serve Until Next Fall Next: Sunday Night Will Answer Many Questions in the CFL →
Tags: University of Manitoba | Volleyball