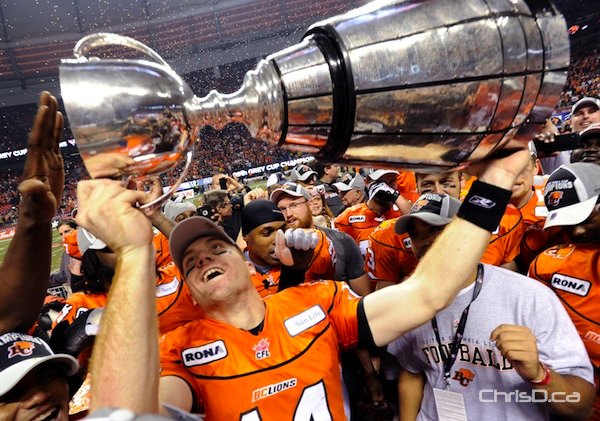 BC Lions quarterback Travis Lulay, the MVP in the game, holds up the Grey Cup after defeating the Winnipeg Blue Bombers in the 99th Grey Cup in Vancouver on Sunday, November 27, 2011. (TODD KOROL / REUTERS) 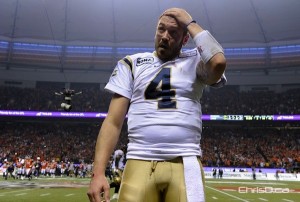 Winnipeg Blue Bombers quarterback Buck Pierce reacts after the BC Lions defeated them in the CFL's 99th Grey Cup in Vancouver on Sunday. (TODD KOROL / REUTERS)

It was too little, too late for the Winnipeg Blue Bombers in the 99th Grey Cup on Sunday night. The Blue and Gold fought back in the dying minutes, but ultimately fell 34-23 to the BC Lions in Vancouver’s BC Place.

“This one hurts a lot.” said Winnipeg All-Canadian safety Ian Logan in an interview with Corus radio. “We made too many mistakes, and they made too many plays and we couldn’t come back at the end.”

“They came out hot. We struggled out of the gates on both ends,” said quarterback Buck Pierce. “They capitalized and we were playing catch up the whole time. That’s hard to do in championship games.”

The Bombers’ offence struggled in the first half, generating a mere six points by way of 30 and 15-yard Justin Palardy field goals, while the Lions put up 14.

BC running back and Winnipeg native Andrew Harris — who was later named the game’s most valuable Canadian — scampered in for a 19-yard touchdown early, while kicker Paul McCallum added 22 and 16-yard field goals, and a punt single.

A 41-yard Jovon Johnson punt return in the third quarter appeared to spark Winnipeg by putting them in solid field position, but Pierce and the Bomber offence couldn’t capitalize, settling for a 33-yard Palardy score to bring them within five.

“Their defence did a good job, and we couldn’t get into a rhythm,” said head coach Paul LaPolice.

BC nearly dominated the scrimmage battle on both sides of the ball. Bomber running back Chris Garrett, coming off a stellar 190 rushing yards in the Eastern Final, couldn’t repeat things on this Sunday, finishing his day with 38 combined yards.

After missing a 41-yard attempt, McCallum added another three points to make it 17-9 Lions before the momentum swung heavily.

Kierrie Johnson beat Winnipeg defensive back Jonathon Hefney on a 66-yard catch and run touchdown to end the quarter before Arland Bruce added another seven minutes later, making it 31-9 Lions midway through the fourth.

The Bombers clawed back, capping an 8-play, 75-yard drive with Pierce finding Greg Carr for a 45-yard major.

Trailing 31-16 late, Winnipeg turned another solid Jovon Johnson punt return into an opportunity, with Pierce hitting Terrence Edwards for a 13-yard score on a third down gamble to make it 31-23 with under two-minutes remaining.

Paul LaPolice then attempted an onside kick in the waning moments, and despite a Winnipeg recovery, it was determined to be Lions ball when Jamie Boreham’s boot didn’t go the required 10 yards.

A 33-yard McCallum try with less than a minute to go ended the scoring, and the Blue Bombers’ chances of capturing their first league title since 1990.

2011 CFL regular season’s Most Outstanding Player Travis Lulay was named the game’s Most Valuable Player. The BC quarterback put together an impressive 320-yard passing performance against a vaunted Winnipeg defence, going 21-of-37 with two touchdowns and no turnovers.