Home » Sports » Sunday Night Will Answer Many Questions in the CFL

Sunday Night Will Answer Many Questions in the CFL 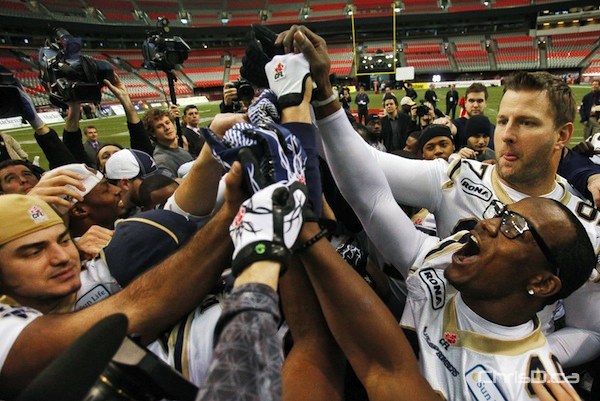 Winnipeg Blue Bombers' Odell Willis (bottom right) leads the team cheer with Doug Brown (above) after their walkthrough in Vancouver on Saturday, November 26, 2011. The Blue Bombers will play the BC Lions in the 99th Grey Cup tonight. (MARK BLINCH / REUTERS)

Can Winnipeg Blue Bombers’ running back Chris Garrett, a preseason cut, continue to dominate opposing defences? Can Buck Pierce finally answer doubters in the city where he won a title, and was eventually dismissed?

And most importantly, can Winnipeg lose the tag of being the longest tenured city without a Grey Cup — 20 years — in an eight-team league?

Within the freshly renovated confines of Vancouver’s B.C. Place, the Winnipeg Blue Bombers invade the BC Lions’ home turf in the 99th edition of the Grey Cup at 5 p.m. this evening.

The game’s key matchup will see Lions quarterback Travis Lulay, fresh off being named the CFL’s Most Outstanding Player Thursday night, square off against the league’s Defensive Player of the Year in Jovon Johnson and the Bombers’ Swaggerville defence.

The Lions are the last team to win a Grey Cup on home field — a 26-23 defeat of the Baltimore Stallions in 1994 at BC Place, the same site where Winnipeg hoisted Governor General Earl of Grey’s Cup in 1990 with a 50-11 defeat of the Edmonton Eskimos.

For more of a Grey Cup preview, listen to this week’s Booth Review podcast below: