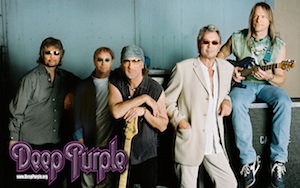 English rockers Deep Purple are brining their Smoke on the Nation Tour to Winnipeg early next year.

The band will be hitting 17 Canadian cities in February, including Winnipeg on Wednesday, February 15, 2012.

Tickets for the concert at MTS Centre’s RBC Theatre go on sale Saturday, December 3 at Ticketmaster.