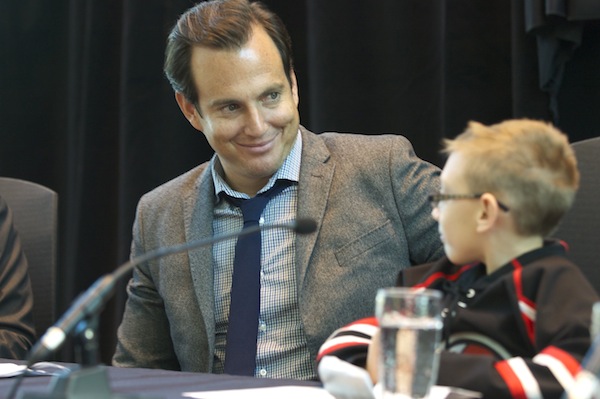 Will Arnett attends a news conference at the United Way headquarters in Winnipeg on Tuesday, November 29, 2011 to announce the new Dream Seats program. Skyler Pearson (right) was the first recipient of a pair of donated Winnipeg Jets tickets. (SVJETLANA MLINAREVIC / METRO WINNIPEG)

Canadian actor and comedian Will Arnett was in Winnipeg Tuesday to launch a new program at the United Way, meant to send kids to Winnipeg Jets hockey games.

Dream Seats is a ticket donation program, in which Arnett has donated the first set of Jets season tickets to the organization. The tickets are for youth who might not otherwise have the chance to experience an NHL game. The program will also accept Blue Bombers and Goldeyes tickets from generous donours who contribute. The first recipient of a pair of Jets tickets under the Dream Seats program was 12-year-old Skyler Pearson from Baldur, Manitoba. Pearson, who has spina bifida, used the tickets to attend the Jets’ season home opener in October.

Arnett has a history with the United Way. His grandfather, William Palk, was the first ever campaign chair before passing away in 2009. Arnett later contributed to the William Lawrence Palk Family Fund within United Way of Winnipeg’s endowment, the Tomorrow Fund, to honour his grandfather’s legacy.

Arnett — known for his work on “Arrested Development,” “30 Rock,” and other television shows — is married to actress Amy Poehler.