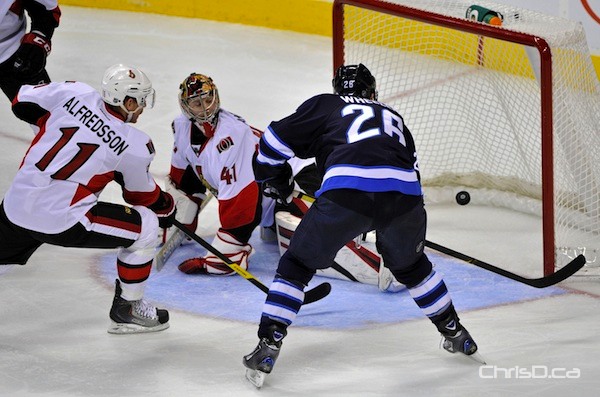 WINNIPEG — The Winnipeg Jets had a great chance to make serious bread in the Southeast Division standings Tuesday night, but blew an early third-period lead, falling 6-4 to the Ottawa Senators at MTS Centre.

“Washington lost (Tuesday night), Carolina I believe lost. There’s a game where we could’ve grabbed two points and could’ve been one point behind Washington, and we all knew it,” said Winnipeg bench boss Claude Noel after the game. “I sensed this was going to be a difficult game to win after the first period.”

The Jets captured a second period lead on Blake Wheeler and Alexander Burmistrov markers while Anderson faced a wicked Winnipeg rush of chances.

Ottawa’s leading goal scorer Milan Michalek added two more to his season total (14), while Zach Smith also had a pair for the Senators.

“There was goals on both sides and it was a lot of fun,” said the eighth-year forward Michalek, who captured his 300th career point in the game. “The fans were great too, so it was a great atmosphere.”

Meanwhile, Winnipeg’s leading goal-scorer Evander Kane exploded in the third, tying the game with a neat little scoop shot in the second minute, and then gave the home side the lead on the power play a mere 1:17 later when he found a Mark Flood rebound for his 12th of the season.

Ottawa’s leading point scorer Jason Spezza tied it 4-4 midway through the final frame with a blistering wrister off the iron. Smith’s second of the game, coming on the power play, gave Ottawa the lead with less than seven minutes to go.

The Jets pressed for an equalizer, but Ottawa held on until a Nick Foligno empty netter sealed it with just over a minute left.

“That was a tough building,” said Ottawa head coach and 1980’s Winnipeg Jet great Paul MacLean. “I thought the last four minutes we did a really good job not giving up the neutral zone and not giving up our zone easily, and making it difficult to get in.”

The 2.0 Jets, now 9-11-4 on the year, will work to build on their fourth-place division standing with 12 home contests this coming month, beginning with the return of the 1.0 squad that left town in 1996 — the Phoenix Coyotes on December 1.