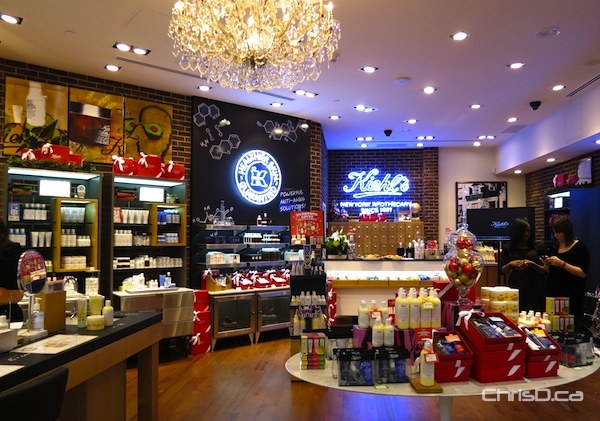 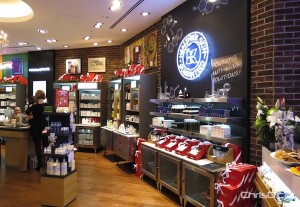 Kiehl's in Polo Park is open just in time for the holiday season. (VINCENT LEE / CHRISD.CA)

American cosmetics retailer Kiehl’s is opening its doors in Polo Park Shopping Centre today with an initiative to give back to the community.

The New York-based company known for premium skin, hair, and body care products, will donate 100% of the first day of sales to the After School Matters program, part of the Winnipeg Jets True North Foundation.

“We’re really excited to be a part of the community,” said Angela Luchkovich, group marketing manager for Kiehl’s, who gave local media a preview of the store on Tuesday. “We’re hoping to get a really strong turnout in terms of customer support.”

The “Shop for the Cause” event will see Jets captain Andrew Ladd make an appearance at the store from 1 p.m. to 3 p.m. this afternoon to sign autographs on purchased products.

It’s the first Kiehl’s store to open in Manitoba, and like its other locations, has a unique attention-grabbing element of sorts. For Winnipeg, it’s a beautifully-polished 1969 Harley Davidson Electra Glide FLH semi-custom motorcycle that sits inside the store. The hog is a tribute to one of the company’s founders, the late Aaron Morse, a collector of vintage motorcycles.

Kiehl’s hopes the vintage bike also helps to attract male clientele, which might find that the store offers an array of products for them as well.

“We know that men like clean, simple, easy routines,” Luchkovich added. One of the many men-targeted products is Facial Fuel, a vitamin-enriched and energizing non-oily moisturizer meant to “wake up and lift dull, fatigued skin.” Pre-shave items and masculine-scented moisturizers also take up space on the retailer’s shelves.

The shop is quite visually trendy, bringing a sense of old New York City flare to the design. The first thing you notice upon entering is the Andy Warhol-inspired décor, as well as the large chandelier hanging from the ceiling.

Kiehl’s staff pride themselves on the customer service aspect of the shopping experience, offering up trials and testers of the myriad of moisturizers, cleansers, scents, facial creams and other products, including items for babies and pets.

“We always like to say we have something for everyone,” Luchkovich said.

The 1,000-square-foot store on the second level of the mall is just another high-end addition to the shopping centre in recent years. Sephora and Forever 21 were long-rumoured to choose Winnipeg as their next location, and when they did, customers flocked in droves to pamper themselves with the latest beauty products and fashion apparel.

The Winnipeg store is the 11th for Kiehl’s in the country, having first opened in Toronto in 2003. The company, which is celebrating its 160th anniversary, chose the city after seeing the demand from visiting Winnipeggers at its Vancouver, Edmonton and Calgary locations.

— With files from ChrisD.ca’s Vincent Lee