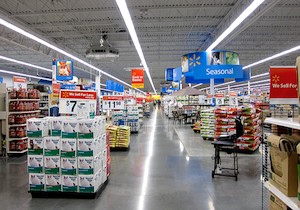 The inside of a Walmart is shown in this file photo. (BUYRIC.COM)

Walmart Canada has extended its store hours across the country to accommodate the Christmas shopping rush, including at several Manitoba locations.

Starting Friday, 202 of the company’s 329 stores nationwide will operate around the clock until Christmas Eve.

Walmart in Brandon, Dauphin, Portage La Prairie, Selkirk and Winkler will be on a 24-hour schedule. The Flin Flon and Thompson stores will be 24 hours from December 9 to 24.

The retailer has previously held its doors open all night during the holiday season to much success, allowing shoppers the flexibility to cross items off their list at their convenience.