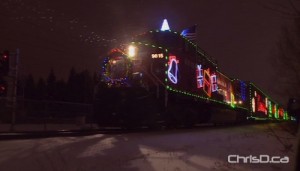 The Canadian Pacific Holiday Train will roll through Winnipeg tonight — just one of the train’s 140 stops across Canada and the United States this holiday season.

The colourfully-lit box car, which acts as a concert stage, is a way to draw in support for local food banks. The holiday freight train will be covered in hundreds of thousands of bright lights, making it hard to miss as it comes through town.

The public can donate a non-perishable food item to Winnipeg Harvest and take in free entertainment on Molson Street between Panet Road and Munroe Avenue beginning at 9 p.m.

Earlier in the evening, the train will stop on Railway Avenue in Whitemouth, Manitoba. On Sunday, you can catch the train in Portage la Prairie at 3:45 p.m. and Minnedosa at 8 p.m.