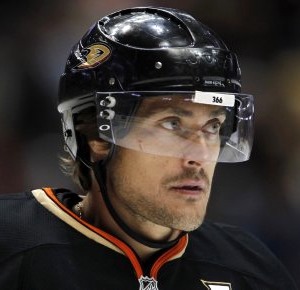 Winnipeg’s favourite hockey player from days gone by — Teemu Selanne — addressed the media via conference call Tuesday afternoon in anticipation of the 41-year-old’s return to the city in which his NHL career launched.

“I didn’t really have a chance to say goodbye for the people and the city. The next day, I’m gone,” said Selanne of his unexpected trade from Winnipeg to Anaheim on February 7, 1996.

“I was shocked, obviously,” added the 19-year NHL veteran. “Two weeks before the new Winnipeg owners called me on the road. There were some rumours that they might trade one of us three — (Alexi) Zhamnov and Keith Tkatchuk, or myself. (They) said… ‘Don’t worry about those rumours. Just play hockey and you’re going to be a big part of our future down in Phoenix.’ That’s why I didn’t really expect to get traded, but I remember that phone call. It was tough — especially your first trade. You almost feel that you have failed.”

Teemu can rest assured he hasn’t failed in the hearts and minds of Winnipeg hockey fans. Still to this day, at outdoor shinny gatherings, hockey-related events, and even NHL games for a franchise in which he never played, Selanne’s name and number is still worn proudly on the back of countless Winnipeg Jets jerseys from the 1990s.

“There’s a reason why the plates on their cars have ‘Friendly Manitoba’ — it’s a really friendly city.”

Selanne spoke on the return to his four-year home, when the Ducks visit the Jets on Saturday, December 17.

“I’m very excited. It’s funny… when the (season schedule became public) I marked the date in my calendar. Even I didn’t know if I could play still this year (at the time). I knew it was going to be a very special chance to come back there and play. I don’t really know what to expect.”

“I’ve heard that building is rocking, and the fans are so excited about their team.”

Selanne laughed when told the Winnipeg fans booed another former Jet, Shane Doan, and added, “That’s funny. Hopefully they’re not going to boo for me.”