Investors Group Field will be the name of the Winnipeg Blue Bombers' new football stadium at the University of Manitoba. (HANDOUT) 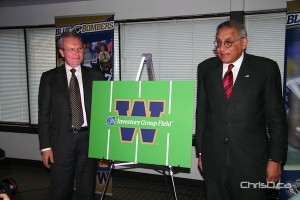 The Winnipeg Blue Bombers’ new football stadium at the University of Manitoba will be known as Investors Group Field.

The football club made the naming rights announcement Wednesday, effectively ending its partnership with Canad Inns, which currently holds the name of the old Polo Park stadium.

“Today’s great announcement is another chapter in what will be a spectacular facility and one of the premier sports and entertainment venues in North America,” said Blue Bombers interim CEO Ossama AbouZeid.

The stadium will also serve as the new home field to the University of Manitoba Bisons football team.

Watch highlights from the news conference:

“It’s going to be an outstanding facility,” Manitoba Premier Greg Selinger said, who was on hand for the announcement alongside other dignitaries, including Winnipeg Mayor Sam Katz. “As we move forward to completion, we are going to have one of the nicest facilities in the country. And not just for professional football, but for amateur sport as well.”

In August, the Blue Bombers put the call out for a naming rights partner. Commercial rights agency Front Row Marketing Services handled the backend of the corporate partner search for the club.

The wealth management and financial planning firm also holds naming rights to the Investors Group Athletic Centre on the U of M’s Fort Garry campus, home to the university’s volleyball and basketball teams.

The partnership between the football club and Investors Group is part of a 12-year deal. The price of the deal was not disclosed by either party.

The 33,500-seat facility is scheduled to open in south Winnipeg in time for the 2012 CFL season.

— With files from ChrisD.ca’s Darrin Bauming