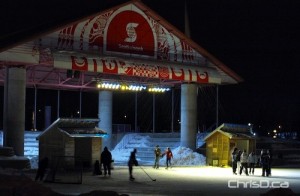 The skating rink near Scotiabank Stage at The Forks is now open, along with 1.2 kilometres of skating trails. (CHRISD.CA FILE)

The Forks has opened 1.2 kilometres of skating trails within Arctic Glacier Park, allowing ice skaters to glide their way through the property.

Along with the skating trails, the Olympic-sized skating rink near Scotiabank Stage, and a toboggan run, are also now open. Earlier this month, the outdoor rink under the Forks’ Canopy was open.

“What we lack in snow we make up for in ice,” said chief operating officer Paul Jordan. He says the skating rinks and trail are being groomed daily.

Arctic Glacier Winter Park will be open until March, weather permitting. All attractions within the park are free.

Skates can be rented at Iceland Skate Rentals located adjacent to the skate changing area. Rates are $2.50 for children and seniors and only $4.50 for adults.