Impaired Driving Charges Up from Last Year in Manitoba 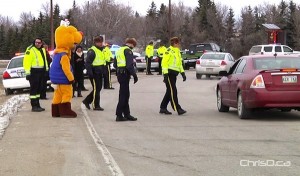 RCMP perform a checkstop near the Perimeter Highway and Portage Avenue on December 2, 2011. (WPGCAMERAMAN / CHRISD.CA FILE)

Manitoba RCMP released statistics from the second week of their Holiday Checkstop Program Monday, and 28 more people have been charged with drunk driving. Compared to the same time last year, police have charged five additional drivers.

During 148 stops, 5,569 vehicles were checked between December 12 and 18. The average blood/alcohol reading was 0.147, with the highest reading being recorded as 0.25. Six people were charged with refusing to take a breathalyzer test.

During one of the checks, RCMP charged an individual in relation to a stolen vehicle. There was also one death during the second week of the program on Highway 3 near Morden. Alcohol is not considered a factor in the accident.