The Winnipeg police bomb unit investigates a package found inside a car involved in a two-vehicle crash on Portage Avenue and Strathcona Street on Monday, December 19, 2011. (MAURICE BRUNEAU / CHRISD.CA) 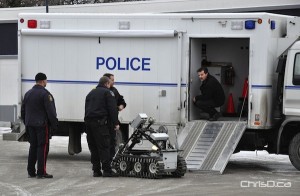 The Winnipeg police bomb unit prepares to use a controlled robot to investigate a suspicious package found on Portage Avenue at Strathcona Street. (MAURICE BRUNEAU / CHRISD.CA)

Winnipeg police have reopened portions of Portage Avenue after a crash Monday morning that forced the bomb unit to be brought in and snarled traffic for hours.

The crash between a Mitsubishi coupe and GMC Jimmy happened at the intersection of Portage Avenue and Strathcona Street just before 7 a.m. The two drivers — a 39-year-old man and a 47-year-old man — were taken to hospital in stable condition.

A suspicious package resembling a pipe bomb was found inside the Mitsubishi, forcing the bomb unit to be called in to assist. The package was detonated safely, police later said. 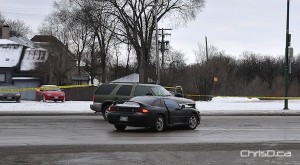 Winnipeg police say the Mitsubishi was travelling at a high rate of speed westbound on Portage when it collided with the GMC Jimmy near Strathcona, which was attempting to turn westbound onto Portage from Strathcona.

The 39-year-old man driving the Mitsubishi was issued a provincial offence notice for driving imprudently.