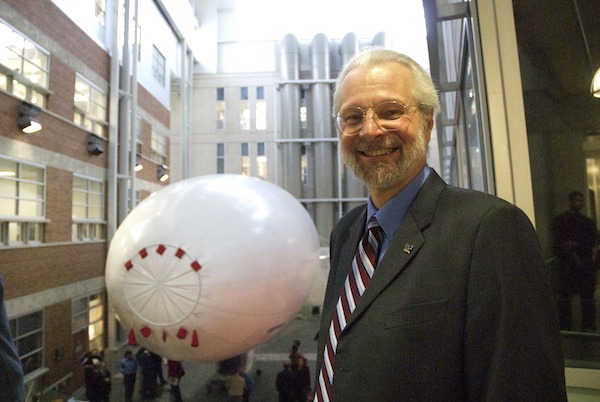 Dr. Barry Prentice stands in front of the first airship in Manitoba and Western Canada during an unveiling at the University of Manitoba on Monday, December 19, 2011. (SVJETLANA MLINAREVIC / METRO WINNIPEG)

The first airship in Western Canada was unveiled Monday at the University of Manitoba, creating the potential for a new mode of transportation to deliver food and supplies to northern communities.

The 80-foot made-in-Manitoba airship was built by Buoyant Aircraft Systems International (BASI) and ISO Polar. It can reach speeds up to 45 mph in light winds and an altitude of 10,000 feet.

“Because the lift is free, airships do not consume much fuel and the economic competitiveness of airships is growing,” said Barry Prentice, president and CEO of BASI. Prentice is also a professor of supply chain management at the I.H. Asper School of Business and the former director of the Transport Institute at the University of Manitoba.

While the airship is technically off the ground, it won’t be heading up north anytime soon. BASI will be undertaking a research program on cold weather operations, ballast exchange, robotic flight, electrical propulsion and fuel cells.

“The airship industry will need many engineers and technicians, as well as pilots and ground crews as the technology becomes accepted and expands,” Prentice added. “It is our hope that Manitoba can be the centre of this educational and research activity because it will help attract other airship companies to establish a presence in the province of Manitoba.”

BASI has also signed a Memorandum of Understanding with Red River College and the U of M.