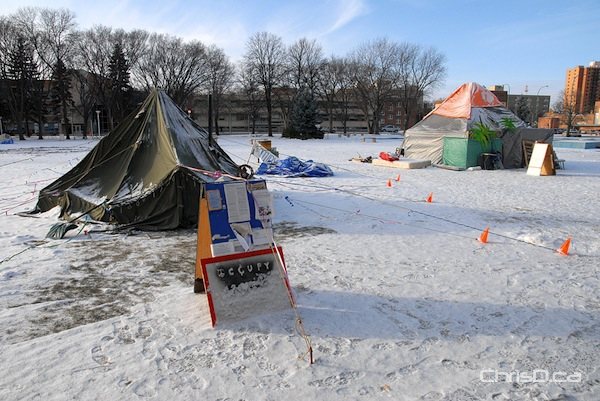 The few remaining tents in the Occupy Winnipeg camp at Memorial Park as seen on December 16, 2011. (STAN MILOSEVIC / MANITOBAPHOTOS.COM)

The remaining tents at the Occupy Winnipeg camp were torn down Wednesday after numerous warnings from the province.

Conservation officers and police descended on Memorial Park at around 7 a.m. to remove the tents, including a yurt used as a central meeting place.

The camp has been the subject to several small fires, which provincial officials have expressed safety concerns about.

At the time the camp was dismantled, only about three protesters remained.

The protestors set up October 15 in an effort to draw attention to income inequality and corporate greed. The movement was mimicked after the Occupy Wall Street protests in the United States.