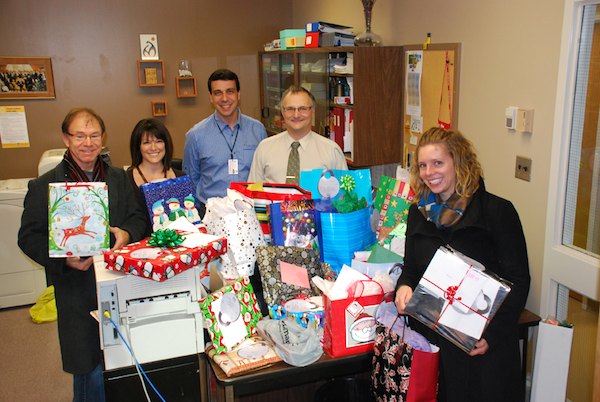 Staff with Home Instead Senior Care show off the slew of gifts donated under the 'Be a Santa to a Senior' campaign this year. (HANDOUT)

Winnipeg seniors will be treated to more than 700 gifts this Christmas season thanks to the generosity of Winnipeg strangers.

The Be a Santa to a Senior campaign was launched in November and provides holiday gifts for isolated and deserving seniors in the city.

The campaign was orchestrated by Home Instead Senior Care network, which collected and distributed gifts to seniors who wouldn’t otherwise receive a gift this holiday season. The campaign brought in 200 more gifts than last year.

“The response to the program this year was overwhelming,” said Julie Donaldson of Home Instead Senior Care. “People of all over the city and of all ages were calling or stopping by the office wanting to get involved.”

Seniors were chosen for the campaign based on input from non-profit organizations, which would pass the names of isolated and deserving seniors on, making them eligible to receive a gift. The names and gift requests of seniors were placed on a Christmas tree in the form of paper ornaments for donors to fulfill their requests.