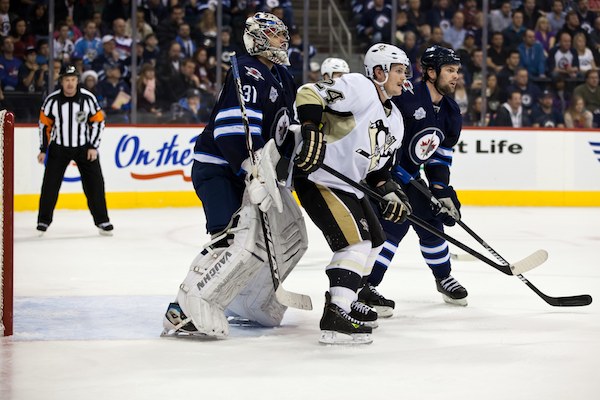 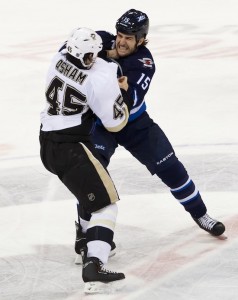 WINNIPEG — It’s a good thing the Winnipeg Jets can now take a few nights off to rest, as fatigue was a clear factor in their 4-1 loss to the Pittsburgh Penguins Friday night at MTS Centre.

The Jets were beyond fortunate to be tied 1-1 after 40 minutes, trailing 26-12 in shots on goal. It took the Penguins all of 4:54 of the third to seal the deal, scoring three times via James Neal, Jordan Staal, and Pascal Dupuis.

“At that point you feeling a little bit like the next goal is going to be a big decider,” said Penguins head coach Dan Bylsma. “Right off the hop we get a fore-checking goal… that turns out to be the game winner.”

Friday’s tilt was Winnipeg’s third game in four nights, and it showed. Despite coming out with a very high-tempo game, the Jets battled to keep pace with the Penguins, who were in Winnipeg on Thursday night — resting — as they watched Montreal fall 4-0.

Pittsburgh dominated the shot clock throughout the night, finishing with a 39-19 advantage.

Watch post-game reaction from the Penguins:

“When the game was going on I said to myself, ‘this is going to be tough,’” said Jets coach Claude Noel. “Having said that, we go into the third period tied 1-1. We have a chance to win the game. Can we muster up 20 minutes to play? Obviously we weren’t able to.”

Penguins superstar Evgeni Malkin continues his beyond impressive play with Sidney Crosby still out of the lineup. His assist on Neal’s game winner extends his point-scoring streak to seven games, where he has amassed 16 points (6G, 10A).

“He’s unbelievable, the way he skates with the puck,” said Neal, who is now in second place among the NHL’s leading goal scorers with 20. “He makes moves at such high speeds. It’s a pleasure to play with him. He’s obviously helped me out a lot. He’s going to put the puck on your stick when you’re in a position to shoot.”

Pittsburgh’s win gives them three in a row and a fifth-place seeding in the Eastern Conference heading into the break, while Winnipeg’s loss keeps them out of the playoff picture. Currently, the ninth-placed Jets sit two points back of Ottawa and New Jersey who are tied for seventh in the conference.

Winnipeg returns to action on Tuesday in Colorado before returning home to face the Kings and Leafs on December 29 and 31.