$1 Tickets for Upcoming ‘Disney On Ice’ at MTS Centre 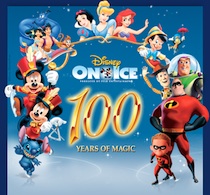 One hundred tickets to the upcoming Disney On Ice production at MTS Centre will be sold for $1 per performance on January 5.

The one-day promotion is in conjunction with Disney On Ice donating 100 tickets to Big Brothers Big Sisters of Winnipeg at the same time.

The spectacle will celebrate 100 Years of Magic in Winnipeg January 26-29.

The limited number of “Zip-A-Dee-Deal” tickets will be available for the following performances:

The discounted tickets will be available in-person from 10 am to 1 p.m. on Thursday at the MTS Centre Box Office, Portage and Donald entrance and are available while supplies last. There is a limit of six tickets per person for their chosen show.

Fans who miss out will be able to purchase tickets at a special one-day only $5 off discount rate (excluding VIP and rinkside seats).

← Previous: Two People Arrested in Connection to Car Fire in Portage Next: Back to the Post-Holiday Grind for Most Folks →
Tags: MTS Centre