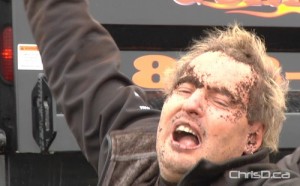 Winnipeg escape artist Dean Gunnarson is at it again — defying death by performing a risky stunt in China.

Gunnarson will attempt to escape from a tomb of ice on a frozen lake high in the mountains this week, before a bus loaded with explosives drops on top of him. Gunnarson will be locked and chained inside the tomb, with the bus dangling above him from a crane. He will only have 100 seconds to perform the escape before he is crushed.

“I have been here for a few days training for this escape but the air being so thin has caused me to get altitude sickness,” Gunnarson said in a release Wednesday. “The lack of air and trying to do even small things just leaves me grasping for breath. This is like nothing I have ever encountered before.”

The escape will take place about 100 kilometers west of the provincial capital of Xining at 3,205 metres (10,515 feet) above sea level in a depression of the Tibetan Plateau. Chinese TV will air the escape during a one-hour TV special on Saturday.