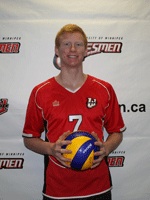 The University of Winnipeg Wesmen have attracted the number one ranked high school men’s volleyball player in the province to join their team.

Casey Schouten of Miles Macdonell Collegiate will join the Wesmen for the start of the 2012-2013 Canada West season, the team announced Thursday.

The 6’5″ right side will start in September and has several accomplishments to his name coming in. Schouten was named the MHSAA Boy’s Volleyball Player of the Year and earned a spot on the All-Manitoba Team. He helped the Miles Macdonell Buckeyes to the AAAA Provincial Volleyball Championship last November and earned Most Valuable Player recognition.

“Casey is a strong skilled player. Through his development in the WinMan Volleyball Club system, his time at River East Collegiate and this year at Miles Mac, he has played three different positions,” Wesmen head coach Larry McKay said.

Schouten will graduate in June and plans to study Kinesiology when he arrives at the University of Winnipeg.

← Previous: Homegrown Wrestler Jericho in the City January 20 Next: Van Halen to Play MTS Centre on May 13 →
Tags: University of Winnipeg | Volleyball